Notebook source code: notebooks/16_real_world_applications__visualizations_in_kendall_shape_spaces.ipynb
Run it yourself on binder

David G. Kendall first took interest into triangular shapes while studying random alignments of points in archeology and related fields [KK1980]. Following this statistical study, he developped the more general theory of shapes. This theory echoes in many fields like biology, medicine, or image analysis, where the shape of an object is particularly relevant when it comes to its analysis. Since the deformation of a shape is not necessarely linear, we need to use geometric statistics in order to proceed with such data.

In Kendall theory, the word shape is used in the common sense, refering to the appearance of an object. Since the shape of an object should not depend on the way it is looked at or computed, it is natural to remove location, rotationnal and eventually scale effects. A practical way of describing an object’s shape is to locate a finite number of relevant points on it, which we call landmarks, which should summarize the geometrical and/or scientifical information [DM2016].

It is useful to see that considering first the action of translations and dilatations before applying rotation group \(\text{SO}\) allows to write :

The tutorial is organized as follows :

The space \(\Sigma_2^3\) of 2D triangles is a manifold of dimension \(2=3\times(2-1)-1\). Kendall showed that it is isometric to the \(2\)-sphere of radius \(1/2\) [K1984]. Such an isometry can be computed explicitly. Practically, this means that 2D triangular shape datasets can be directly visualized in 3D without losing any information (especially geometrical ones). Furthermore, all geometric statistics can be directly processed on the sphere, for which we already have a large catalogue of explicit methods.

First step consist in projecting (via the isometry mentionned above) the triangles on the sphere. In order to visualize better how the space \(\Sigma_2^3\) is mapped onto the sphere \(S^2(1/2)\), we plot regularly sampled triangles at their corresponding location (according to the projection). One can easily notice that the equator corresponds to flat triangles while first meridian is paired with the subset of isocele triangles whose apex is red.

We now illustrate how some essential statistic and geometric tools project on the sphere. Given the geodesics and the logarithm map, one can easily compute the parallel transport of a vector \(w\) along the geodesic \(\exp_\text{b.p.}(tv)\) using the Pole Ladder algorithm implemented in geomstats. The diagonal geodesics used by the Pole Ladder method to compute the parallel transport are plotted in red.

In the specific case of Kendall shape spaces, one can use a second method, based on an integration scheme. This method follows the result of [KDLS2021] giving conditions on a vector field in the top space \(\mathcal S^k_m\) for its projection to be the parallel transport in the shape space \(\Sigma^k_m\). The implementation of the method can be found in the KendallShapeMetric and is described along with its comparison to the Pole Ladder method in [GMTP21]. The shape space \(\Sigma_3^3\) is a manifold with boundary, which coincides with its singularity. We see on the above figure that it corresponds to set of flat triangles, which was located on the equator in the case of \(\Sigma^3_2\). We show a first example where the geodesic is radial. It is the projection of the geodesic we previously shot in \(\Sigma^3_2\). 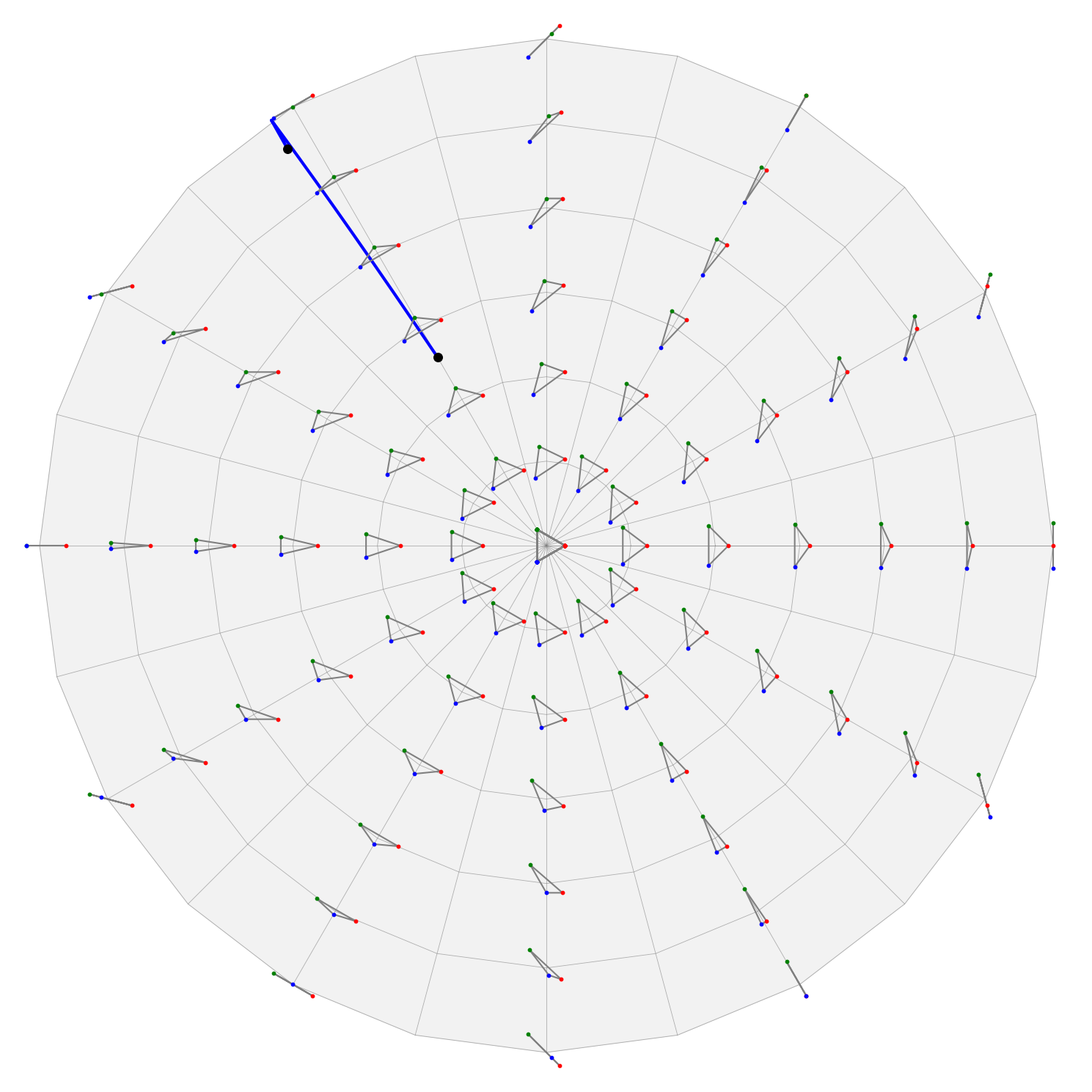 We show a second example where the initial point is no more the equilateral triangle. We compute the parallel transport of an orthogonal vector \(w\) along the previous geodesic using the Pole Ladder method. In this usecase, we will illustrate how to use this last visualization class while investigating if there is a difference between two groups :

We import the dataset of the optical nerve heads from 22 images of Rhesus monkeys’ eyes (11 monkeys), available in [PE2015].

For each monkey, an experimental glaucoma was introduced in one eye, while the second eye was kept as control. One seeks to observe differences between the glaucoma and the control eyes. On each image, 5 anatomical landmarks were recorded:

Label 0 refers to a normal eye, and Label 1 to an eye with glaucoma.

For this study we will consider only 3 first landmarks, such that our dataset is now a set of 22 labeled triangles.

We can visualize the dataset on the disk. We observe that the two sets are very compact and well superimposed. It means that this choice of 3 landmarks isn’t of any help in separating the two groups. Therfore, we choose to include the 5th landmark into the selection and run a new example. In this example, we observe a bigger variability within the two groups. Even though we can’t separate them visually, they are not superimposed either. To highlight this, we can compute the Frechet mean of each group. We observe that the two means are slightly different.

Computing with shapes of landmarks in Kendall shape spaces