Notebook source code: notebooks/04_practical_methods__from_vector_spaces_to_manifolds.ipynb
Run it yourself on binder

From vector spaces to manifolds#

We import the backend that will be used for geomstats computations and set a seed for reproducibility of the results.

Finally, we import the visualization module.

From vector spaces to manifolds#

In the previous tutorial, we visualized data that naturally belong to manifolds, i.e. generalizations of vector spaces that are allowed to have curvature.

A simple example of such data is the coordinates of cities on the surface of the earth: they belong to a sphere, which is a manifold. The purpose of this tutorial is to show how we can perform elementary computations on such data.

From addition to exponential map#

The elementary operations on a vector space are: addition, substraction and multiplication by a scalar. We can add a vector to a point, substract two points to get a vector, or multiply a vector by a scalar value. 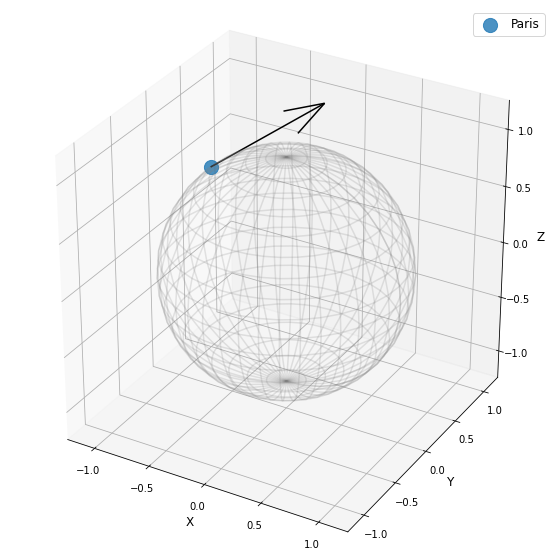 For points on a manifold, like the sphere, the same operations are not permitted. Indeed, adding a vector to a point will not give a point that belongs to the manifold. The exponential map is the operation that generalizes the addition of a vector to a point, on manifolds.

The exponential map takes a point and a tangent vector as inputs, and outputs the point on the manifold that is reached by “shooting” with the tangent vector. “Shooting” means taking the path of shortest length. This path is called a “geodesic”. From substraction to logarithm map#

The logarithm map is the operation that generalizes the substraction of two points, that gives a vector.

The logarithm map takes two points on the manifold as inputs, and outputs the tangent vector that is required to “shoot” from one point to the other. So far, we have given examples of geodesics on the sphere. The sphere is a simple manifold that is easy to visualize. Yet, geomstats provides many more manifolds, on which the exp and log are defined. Let’s present a few more.

Geodesics on the hyperbolic plane# 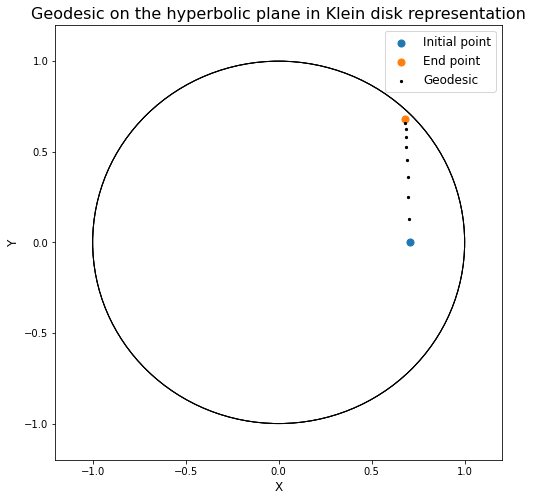 We can visualize the same geodesic in Klein disk representation. We create two points in SE(3), and compute the geodesic between them.

We visualize the geodesic in the group SE(3), which is a path of frames in 3D.