Notebook source code: notebooks/17_foundations__stratified_spaces.ipynb
Run it yourself on binder

Dear lerner, the aim of the current notebook is to introduce stratified spaces and its implementation within geomstats.

The \(k\)-Spider consists of \(k\) copies of the positive real line \(\mathbb{R}_{\geq 0}\) glued together at the origin. Within geomstats, we defined the following: 1. Spider Point: a point object defining the ray and the value 2. Spider: the space defined by the number of rays 3. Spider Geometry: by chosing a metric on the rays, we can define a metric on the whole space 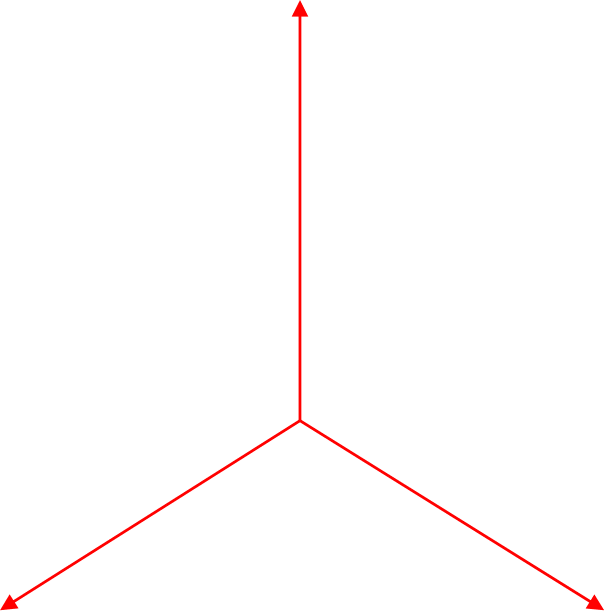 We can define a spider with \(k=3\) rays (strata) and sample two points from it.

Given a metric \(d_{rays}\) on the strata (the rays), we can extend it to the whole space by

Graph Space is a space defined to describe set of graphs with a finite number of nodes which can be both node labelled or node unlabelled.

We consider graphs as triples \(G=(V,E,a)\), where the node set \(V\) has at most \(n\) elements, and the edge set \(E \subset V^2\) has maximal size \(n^2\). The nodes and edges are attributed with elements of an attribute space \(A\), which is considered to be Euclidean, via an attribute map \(a \colon E \rightarrow A\). Here, the map \(a\) allows us to describe attributes on both edges and nodes, as we use self loop edges (diagonal elements in the graphs adjacency matrix) to assign attributes to nodes. A graph with scalar attributes is completely specified by a weighted adjacency matrix of dimension \(n\times n\), residing in a space \(X=\mathbb{R}^{n^2}\) of flattened adjacency matrices. If the attributes are vectors of dimension \(d\), the graph is represented by a tensor of dimension \(n\times n\times d\), residing in a space \(X=\mathbb{R}^{n\times n\times d}\).

Consider a graph with \(n=3\) nodes and \(A=\mathbb{R}\) scalar attributes on nodes and edges. The class Graph describe a single graph via its adjacency matrix.

To simplify the visualization and the access to different methods, the Graph object can be turned into a networkx graph. Graphs can have different numbers of nodes and different node labels or order. We assume the existence across the populations of at most \(n\) distinct nodes and we add fictionally null nodes to smaller networks, so that all graphs can be described by a fixed-size adjacency matrix. Graph Space is initalized by the maximal number of nodes in the set.

Graphs can be considered labelled or unlablled, meaning that the observation in the set can share the same nodes (labelled) or not (unlabelled). We can describe both cases into Graph Space by using a little trick.

To deal with unlabelled nodes, alignment two graphs corresponds to finding optimal permutations of their nodes. By allowing node permutation, a concept of equivalence class is introduces (i.e., every network is associated to the set of networks obtained by permuting the original one). In geometrical terms, this can be described as a quotient space obtained by applying a permutation action to the set of adjacency matrix.

In details, the group of node permutations \(T\) can be represented via permutation matrices, acting on \(X\) through matrix multiplication. The binary operation:

thus defines an action of the group \(T\) on \(X\). The obtained quotient space \(X/T\) is called graph space, and each element of \(X/T\) is an unlabelled graph \(G\), represented as an equivalence class \([x]=Tx\) which contains all the flattened adjacency matrices in \(X\) which can be obtained from \(x\) by permuting nodes. The map \(\pi \colon X \to X/T\) given by \(\pi(x) = [x]\) can be thought of as a projection of the Euclidean total space \(X\) onto the graph space \(X/T\), and the total space \(X\) plays a similar role relative to graph space, as the tangent space does for manifolds, by providing a Euclidean space in which approximate computations can be carried out and projected back onto the space of interest – in our case the graph space \(X/T\).

To deal with labelled nodes, we restrict the set of permutation matrices to the identity: \(T=\{I\}\)

To define a metric on graph space, we need to chose a metric on the total space. Any metric \(d_X\) on \(X\) defines a quotient pseudo-metric

on \(X/T\). Since the permutation group \(T\) is finite, \(d_{X/T}\) is a metric, and the graph space \(X/T\) is a geodesic space. In the implementation, we suppose that the default metric in the total space is the Frobenius norm between adjacency matrix.

The metric on Graph Space relies on the optimization along the quotient fibers. In this context the optimization problem is known as graph matching (or network alignment) and corresponds in finding a match between the two sets of nodes which minimizes the distance between the corresponding adjacency matrices. The distance function needs an aligner input, which solves the minimization problem by returning the second input graph optimally aligned. Two of the available aligners are:

We can align a set of points using the following function, which returns the permuted graphs:

The permutations of the nodes computed by the align_point_to_point function are saved in the perm_ attributes. Notice that only the last run output is saved.

To perform the alignment between the geodesic and the point, we need to to define which methodology to adopt. This is specified in the set_point_to_geodesic function.